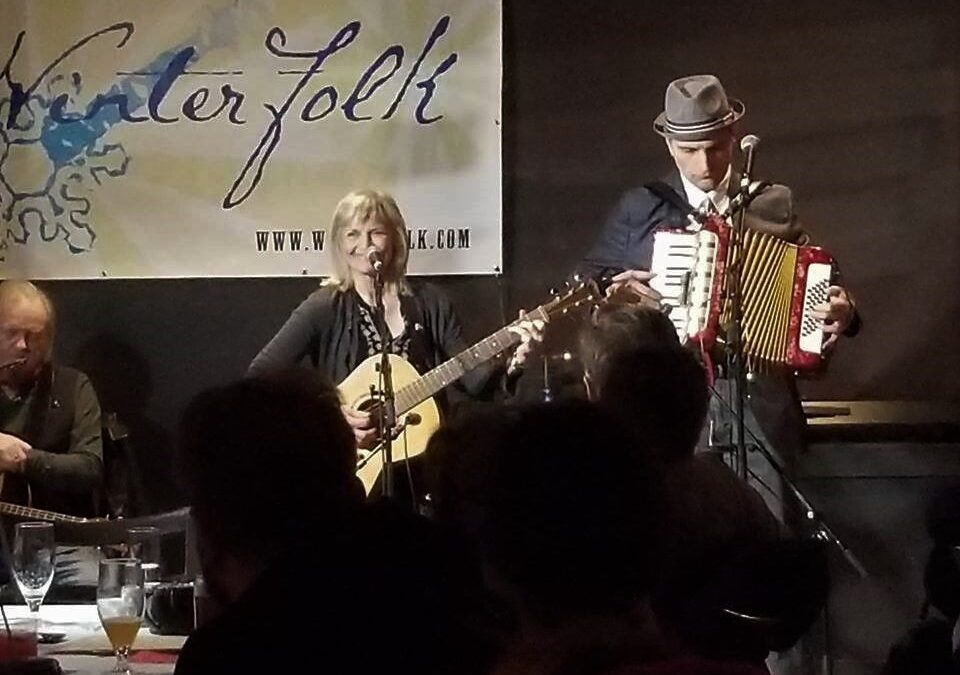 Although Sue and Dwight were born too late to be part of the folk revival of the 1960’s their music embodies the spirit of that time. Both are songwriters whose work focuses on themes of peace, courage, and social justice.

At their live shows they share, without pretension, their stories of the prairies, life in the big city, and travels in East Africa. Their warm harmonies, nesting on a bed of acoustic instrumentation, create a warm, intimate and memorable experience.

“Their lyrics always tell a story and frequently pull at your emotions…asking us to consider what we can do
to improve our world and the planet we live on.”  – Bruce Hanson, smalltowntoronto.com

Sue and Dwight have released three CDs of original music and three Singles. The first CD, Darlings of the Open Stage, is a tribute to passionate performers everywhere who take the stage each night to share their music. The duo honed their own songwriting at an open stage at Toronto’s Cameron House hosted by the Leslie Spit Treeo. The weekly sessions were a creative incubator for numerous emerging songwriters and spoken word artists. For Sue and Dwight, it spawned a reflection on their prairie roots that also hinted at their new experiences in Canada’s largest city.

Little Child Big World, the follow up CD, is a collection of songs inspired by travels to small villages in Ethiopia, Malawi, Uganda and Tanzania. While there, Sue and Dwight met small farmers, people living with AIDS, night commuters and other courageous and resilient individuals. They also met the dedicated rural aid and health workers engaged in the communities. While underlining the injustice of the disparity between the developed and developing world, the CD’s focus is on the individuals the duo met. Their stories paint pictures of a world so familiar yet so afar. Both CDs are co-produced with Kevin Quain.

Their newest release For A Moment is a collection of songs that reflect the diversity of moments that make up our everyday lives, co-produced with Kevin Quain and Mike Elmer. Some moments are fleeting glimpses into the lives of people we pass by. Others can be deeply personal…leading to epiphanies that give us a whole new outlook. Still others can lead to significant social or historical change at some unforeseen point down the road. Our lives are full of these and other moments.

Sue and Dwight have also released the following Singles: In The Spirit of The Holidays, How Do We Get Out of This Mess?, A Good Life, When They Came For The Others, and When The Rains Don’t Come.

“Their music embodies the spirit of roots music, and too few recent artists can accomplish that.”
– Brian Gladstone, Festival Director, Winterfolk

As performers and songwriters, Sue and Dwight like to connect with audiences wherever they are. For the past 15 years, the duo has been a fixture on the Toronto Music Scene performing in clubs, house concerts and festivals in the area, including a six year weekly residency at The Cameron House, and a two year residency at the 120 Diner. Tours have taken them further afield to other parts of Ontario and Western Canada. They have also had the good fortune to be able to perform for the very people many of their songs have been written about…women living with HIV, students, and farmers…in school yards, villages and fields in Malawi, Tanzania, and Uganda.

During this time, Sue and Dwight have been a part of Toronto’s Subway Musicians Programme. The experiences of a subway busker have provided a rich source of insights and stories that Sue has compiled in a book called Attention All Subway Riders – A Busker’s Eye View.

In 2012, Sue and Dwight developed a musical show that pays homage to the duo’s folk heroes like Pete Seeger, Phil Ochs, Buffy-Sainte Marie, Ian and Sylvia, and Bob Dylan. ‘60′s Folk Revival – Where Have All The Folk Songs Gone’ tribute show transports audiences back to the coffeehouses of that special time. The era’s songs of hope and social justice still resonate today and continue to influence Sue and Dwight’s own writing and world view.  More recently they have added more tribute shows, ‘The Greatest Hits Of Peter Paul and Mary’ and ‘Music of Bob Dylan and Leonard Cohen’, and ‘The Legendary Ladies of Folk – Joan Baez, Joni Mitchell, and Buffy Sainte-Marie’.  In February 2020, they launched a new show called ‘Get Together – Sixties Singalong’ presented monthly at the Free Times Cafe. Click on this link to check out the FOLK SONGS LIVE BLOGSPOT

Sue and Dwight are currently sharing their music live online with a weekly show of their original songs called ‘Livingroom Live’ and a monthly 60’s Folk Singalong. See Upcoming Shows for details.