Ruth Schweitzer – Special to The CJN – Lynda Marks Kraar’s parents, both Holocaust survivors, were distressed when they saw their artistic, only child, now an ace guitarist, was preoccupied with music rather than concentrating on academics.

“I think as a child of Holocaust survivors, music was not high up on the priority list. Either you were supposed to marry a doctor or lawyer or be one. And my path was the music. So it made for some conflicts at home,” Kraar said.

Her fascination with the guitar began when she was four years old, in the mid-1960s, watching the Beatles perform on the Ed Sullivan Show. She was eight when she began playing a guitar owned by a couple who lived in the basement of her parents’ North York home. 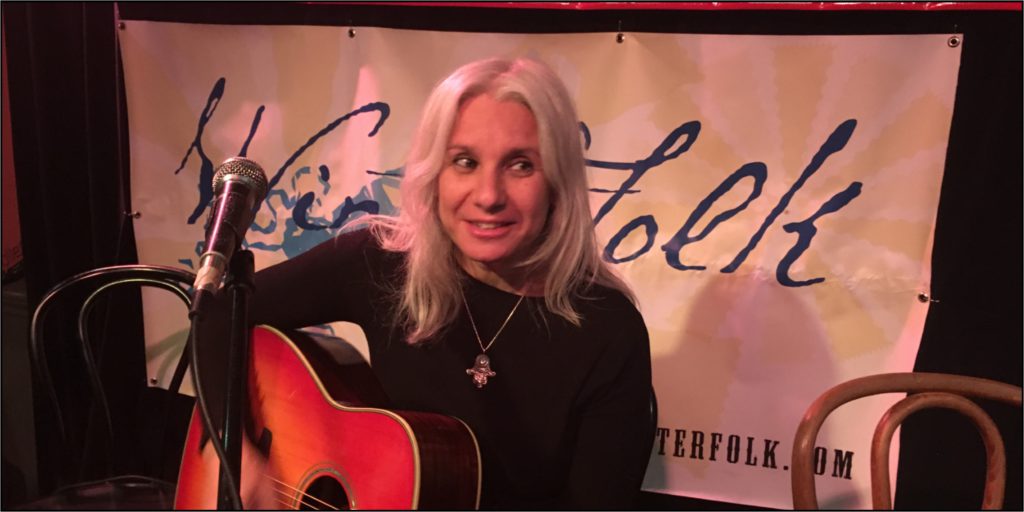 “They had an open-door policy in their apartment – I went downstairs all the time. I could barely wrap my fingers around the neck,” she remembers.

Her parents enrolled her in guitar lessons at a local music store when she was 10. Then four years later, she got her first “real” guitar, she said, a Yamaha FG 180. She still owns the instrument, which is prized by collectors.

By the time she was 21,Kraar was fronting Lynda Marks and the Marksmen. With Ardene Shapiro on vocals, the band played local clubs in Toronto. Also a singer-songwriter, Kraar has written some delightful tunes.

Currently she’s been playing bass with jazz and rock ’n’ roll bands who are getting their music out on Internet radio, releasing videos online and performing at venuesaround Englewood, N.J., where she lives.

Kraar is making a rare Toronto appearance at the annual Winterfolk Blues and Roots Music Festival, running from Feb. 22 to 24.
At the festival, she’ll be showcasing her original material, songs that span both the country music and reggae genres. Country music and reggae may seem unrelated, but they have a lot in common, she said.

“They’re both music that represent everyday people and are meant to uplift and empower. [Country] is really the music of rural people celebrating everyday things – love and finding God and issues of the day and the anger of the working man. That exists also in reggae,” Kraar said.
In 1984, she played the Tel Aviv Museum with the Israeli reggae star DJ Queen Sister Orli. “I sort of got crucified in the Israeli press for playing country licks against reggae music. Later on it would happen that it became a recognized thing, that a lot of really good reggae guitar players incorporated it,” Kraar said.

One of her original reggae songs, Lord of the Universe, on SoundCloud, was a theme song for a carnival on the French sideof St. Martin.For its lyrics,she took a prayer from a siddur and modified it slightly.“All of these Catholics were singing it and loving it,” she said.

In the country vein, Kraar’s original Birds Can Swim (Fish Can Fly) is a toe-tapping cajun crowd-pleaser. Inspired by the story of a fish and a bird that switch bodies and learn to be themselves, the song reflects her happy marriage to Marty Kraar.

Kraar has a busy performing schedule these days. Along with playing bass, she’s the music director of the Palisades All-Star Revue, a popular 12- to 15-member band that performs twice a week in the northern New Jersey area. Several of the group’s musicians came of age in the 1960s and the band’s repertoire includes music from the soundtrack of their lives. A bar they played recently was packed with a couple of hundred customers, many of them dancing and singing along.The whole place was shaking, Kraar said. “At the closing, we couldn’t get them out of there. People didn’t want to leave.”

At Winterfolk, Kraar plays the Mambo Lounge at 9 p.m. on Feb. 23; joins the Brian Gladstone Band at the Black Swan tavern at 10 p.m. on Feb. 23 and performs at the Dora Keogh pub at 4 p.m. on Feb. 24 For more information, visit winterfolk.com.