Reprinted from Roots and Blues Radio – I have been attending this event since I came to Canada ten years ago, In the past I have been a volunteer running the stage at the Black Swan Pub ( Upstairs ) and in recent years have covered the event for Blues & Roots Radio by way of my radio show ( Under The Radar, Sunday’s 9 am ET ) and a series of articles, I love the neighbourhood, and love the homely atmosphere of this festival.

For me it’s a great event to get around, all the venues are within a short walking distance and range from pubs to restaurants with the hub being the Black Swan with it’s two stages upstairs and downstairs.

Brian Gladstone, Beverly Kreller and their team do a sterling job of pulling it all together, and a special thank you from me to the many volunteers who help to make this happen every year. 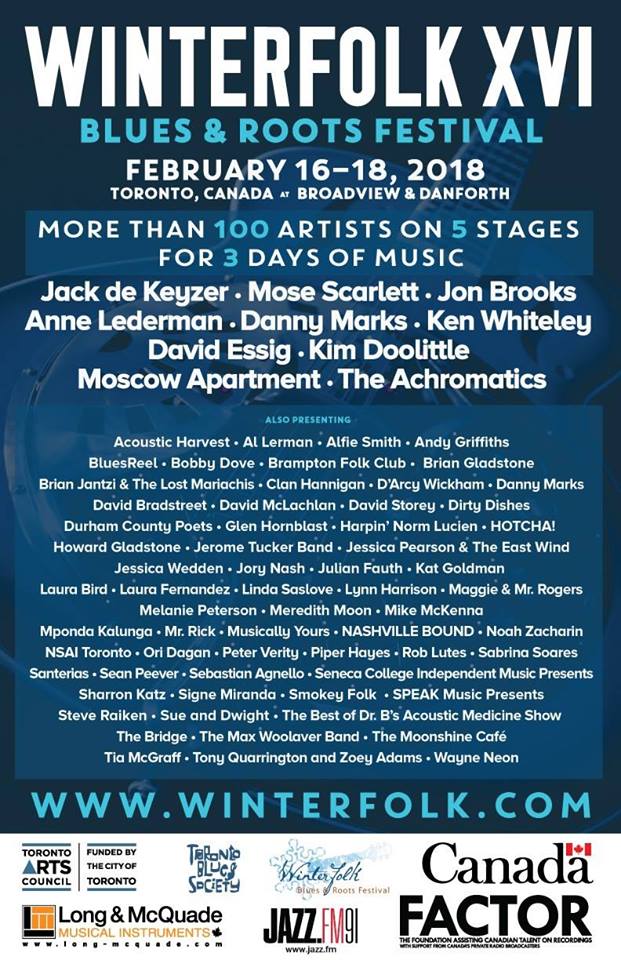 There are more than 100 artists appearing across 5 stages over three days.

There is a fantastic array of artists appearing this year both established and up and coming, when I mention the names Jon Brooks, Jack De Keyzer, Donne Roberts, Margaret Stowe, Danny Marks, The Gary Kendall Band, Noah Zacharin you’ll get an idea of the depth of talent brought forward from the established artists and that’s only a handful, add to the mix Moscow Apartment, The Lifers, Tragedy Ann, Cassie and Maggie then you’ll see also the wealth of talent that’s coming through, there is even a young Australian artist appearing this year, STAV is the Winner of the Folk Alliance Australia ‘Young Artist of the Year’ 2018 and is on her debut Canadian national tour in February 2019 having already appeared at the Folk Alliance International Conference in Montreal where she performed at official showcases, she’ll be gracing the stages at Winterfolk.

I think you’ll agree the snapshot of artists above is a pretty impressive mix, from Roots to Blues, Celtic to Folk, Americana and everything in between there is something for everyone.

You will need to wrap up well if you are walking on the street between venues, but rest assured, there will be warm welcomes inside each for you, if you are eating out there is a stunning array of restaurants and cafe’s in this very cool neighbourhood and there will be tea, coffee and a beverage of your choice a plenty that awaits whilst you soak up the fantastic music that is on offer.

See you there next weekend.

Thanks for all your support

Until next week, happy listening