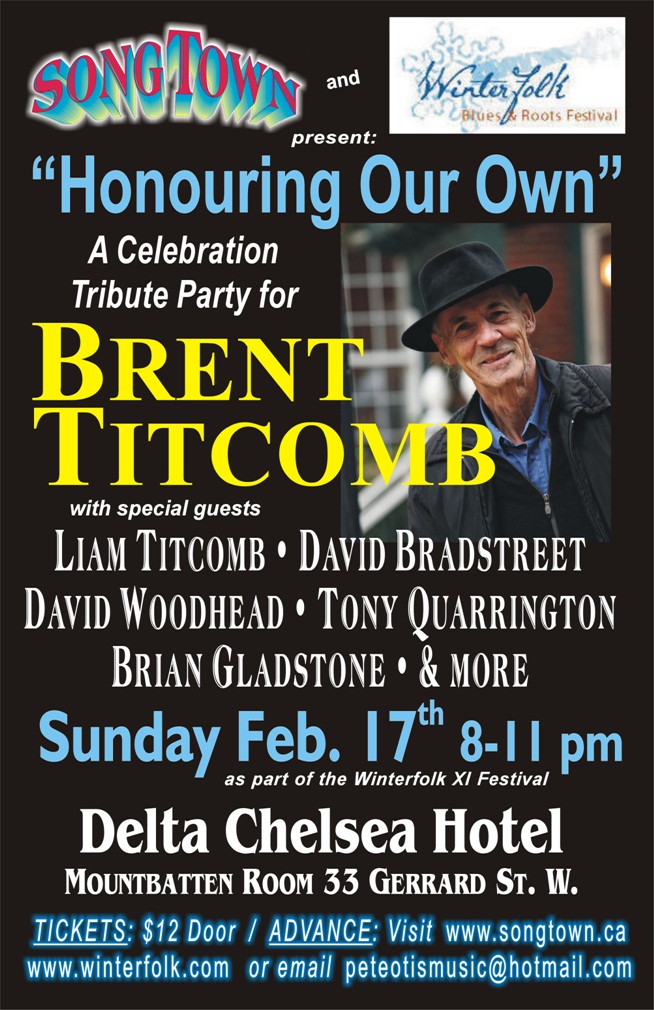 WHAT: Winterfolk XI Blues and Roots Festival Special Presentation – Honouring Our Own

TORONTO – THURSDAY, FEBRUARY 7, 2013 – The Winterfolk XI Blues & Roots Festival and SongTown Music Promotions company present HONOURING OUR OWN, a very special tribute concert to honour one of Canada’s finest and most respected folk icons, BRENT TITCOMB. He will be the toast of the evening with performances by son Liam Titcomb as well as long time musician friends and associates David Bradstreet, David Woodhead, Tony Quarrington, Brian Gladstone, Brian Blain, Glen Hornblast and Bela Ray. The event takes place on Sunday, February 17 @ 8:00-11:00 pm in the Delta Chelsea Hotel’s Mount Batten Room on the second floor. This is one of the few ticketed concerts at the festival and advance tickets are recommended. For more information and complete schedule please visit www.winterfolk.com

The brainchild of SongTown Music’s Pete Otis, the Honouring Our Own series has become a staple on the local Toronto music scene. This is the first time for veteran singer-songwriter Brent Titcomb being honoured in this way and it’s about time. The legendary folkie and native of Vancouver has had quite a career that began in the mid ‘60s as a founding member of the Three’s A Crowd trio. After touring extensively with that group, Toronto seemed like the place of opportunity and they made it their home. They went on to become the top folk/ rock band in Canada for two years and were also one of the first Canadian bands to secure a record deal in the States. They signed with ABC/Dnhill in LA and were produced by Mama Cass Elliott of the Mamas and Papas and Steve Barry. The trio called it quits after four years on the road and that’s when Titcomb began to focus on his songwriting.

Brent’s songwriting has been favoured by many greats including Anne Murray, Glenn Campbell, Andy Williams, Donny and Marie Osmond and Ed Bruce who have all either recorded or performed his material.

His “Sing High, Sing Low” composition was a monster hit for Murray in 1971 following her success with “Snowbird” and he served for many years as a member of her touring band.

His career now has spanned over decades and as Brent said “I’ve been doing this for 50 years…Gulp! Did I say 50 years?” Through those years he has also been an actor, a session musician, doing voice over work in cartoons, radio and TV commercials and even did a stint with a modern dance troop as a character/dancer. Other highlights of his career can be found at http://www.thecanadianencyclopedia.com/articles/emc/brent-titcomb