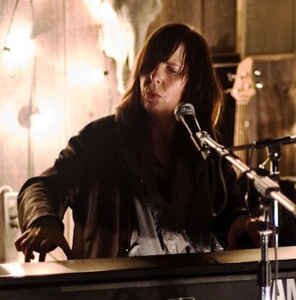 Will You Ever Care for Me, Last CD released in 2009 and gained attention of the Cowboy Junkies and a place with their label Latent Records.

Barbara Lynch did her first album ‘Goodbye and GoodLuck’ with Duke Street Records produced by David Travers-Smith in the early 1990’s. It gained good media attention from Now and Eye magazines and attention from Mike Rathke who was Lou Reed’s guitar player, but no commercial success.

Her most recent album ‘In the Nickelodeon’was a self-produced and financed record of blues and music that gained the interest of Mike Timmins of the Cowboy Junkies.Lynch has been writing a new album in the last year and will be showcasing these songs at Winterfolk if all goes well. She is going back very much to the kind of music feel she heard all the time from her ragtime piano playing mother with of course a modern edge to the blues and raggedy jazz. Lynch and her mother were both the local church organists in a small town called Ayton, Ontario where Lynch was born.

I am very interested in always trying to achieve some sort of human story that others can relate to and fosters feelings of authenticity. I tend to like very simple structure with lots of space and lyrics edited back to where they will mean something. So these are some things I would like to work on in a workshop. Also how instruments work together and arrangements of a piece of music is a passion with me. How to determine when enough is enough or not enough to relay the music and it’s’ emotion.

I usually end up writing from the discovery of bass lines and their feel. It is a lot of fun and of great interest to discover these and to find lyrics to go along.

I love to look at how to achieve comedy also in music with different feels and rhythms and lyrics and talk about how to deliver this kind of song.