Ginger St. James drops the burlesque, but not the tease

From bump ’n’ grind to bumps n’ bruises, Ginger St. James has experienced it all.

And now the former Les Coquettes and Steeltown Sirens burlesque queen is bumping up her popularity as a sassy and dynamic rockabilly singer, songwriter and guitarist, creating a national buzz with some slightly cheeky music and a captivating charisma fueled by her roaring voice and model beauty.

However, it was the “bumps ‘n’ bruises” faction of her life that inspired the title of the Binbrook, Ont. native’s upcoming sophomore album: Diesel and Peas. 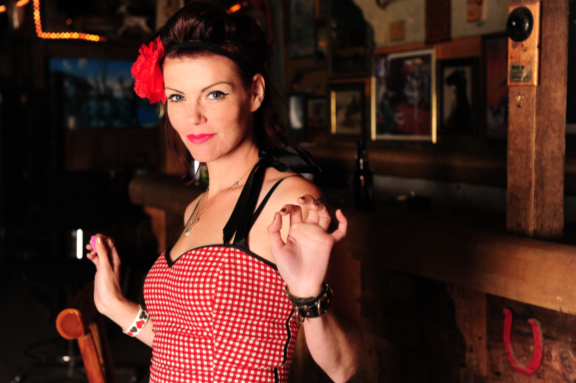 “The title refers to an old farmer’s remedy,” says St. James, who appears at the 12th annual Winterfolk fest Friday night with her Grinders at the Black Swan (154 Danforth Ave.).

“I smashed into an Arizona four-wheeler and got into an accident. I was pretty bloody and I walked up the driveway and I said, ‘Dad, I think I need to go to the hospital.’ And he replied, ‘Aw, you’ll be fine. Just pour some diesel and put a bag of peas on it.”

She belts out a hearty laugh over the phone.

“I draw a lot of influence from my Dad. He’s kind of my muse. Old farmer Paul: he makes me laugh.”

Although St. James’ experience was no laughing matter — as 16 stitches and a bruised pelvis might indicate — she turned the situation to her advantage, forging out a theme for the new self-produced project, a full-length follow up to 2010’s Spank, Sparkle and Growl EP and 2012’s Tease — all welcome additions to Hamilton’s diverse music scene.

“I turned it into a metaphor, so whatever your injury may be, whether it’s the heart or a busted leg or you’re just down and out, there’ll be something in this album that can hopefully heal you in some way or another,” she explains, promising a healthy preview of the new stuff on Friday.

In the meantime, the path that led her to infusing a little bit of theatrics in her performance began at an early age.

“I grew up watching musicals with my nanny and granddad, so the theatrical aspect was sort of engrained in my head,” she admits. “But I’d also go to car shows with my dad, being a hot rod fanatic, so that type of ’50s and ’60s rock ‘n’ roll was always my favourite music from a very young age.

“Then when I started songwriting, I didn’t intentionally hope, oh, I’m going to write a rockabilly song. It was the style I began writing in. It’s a lot of fun.”

Like many others, she received her first guitar as a teenager. But at age 20 her guitar was stolen, and St. James took an extended hiatus from music.

“It was heartbreaking, so I kind of let the musical side of me go, and that’s when I started focusing more on burlesque.”

It would be five years before she’d buy another, but since then, Ginger St. James hasn’t bothered looking into the rear view mirror, creating sassy good times with tunes like “Boom Boom Room” and “Don’t Deceive Me.”

“To a lot of people we sort of fall into the rockabilly culture and that’s sort of our niche that we found, so we can branch out into sort of country and blues genres, and we just keep writing that way. The music is fun and it really speaks to people. We like to entertain and make sure everybody can dance. I get to wear cute dresses and flowers in my hair and that’s a good day when I can do that.”

Those burlesque days? Mainly behind her.

“I’m still involved with a show called Riot Tease Riot,” she says. “I don’t take my clothes off anymore because honestly, I was never really good at it.”

Then that hearty laugh erupts over the phone again. “I can’t even peel a banana that good.”

Love at the Winterfolk, featuring Ginger St. James, Hotcha, Random Order and Swamparella. Friday at the Black Swan (154 Danforth Ave.). Doors 7 p.m. Tickets $10 in advance at winterfolk.com, $12 at the door.

Roots to cure the winter blues

Offering a stage for Ginger St. James’ “a bit of naughty and a bit of nice” is Brian Gladstone, founder of Winterfolk.

Gladstone says this weekend’s return to the Danforth and Broadview area after a couple of years at downtown’s Delta Chelsea Hotel is an invigorating one. He says the appeal of folk music is universal.

“I don’t think there’s anything unique to folk music. There are songs about community, social justice, making a difference in the world: I think there’s a common denominator amongst people, and I think it just sort of reaches out to everybody,” he says.