Rick Fielding was a beloved performer and teacher, who mentored many in today’s roots community like Eve Goldberg and Chris Coole
Rick released two great recordings on the Canadian label BOREALIS. Rick appeared at Mariposa in 1966 with the Gangreen Boys, including Tony Quarrington and Andrew Hermant. They followed Doc Watson (not their choice).

Proposed and Organized by Tony Quarrington

My good friend Tony Quarrington, who has helped me with Winterfolk since it’s inception, suggested we should pay tribute to the late Rick Fielding at the upcmong festival to commemorate the 10th anniversary of his passing. Tony and Rick  worked and played together since the 1960’s, and all of the artists and programming presented was planned and produced by Tony Quarrington in honour of a great artist and lost comrade. by Brian Gladstone Winterfolk Festival Director 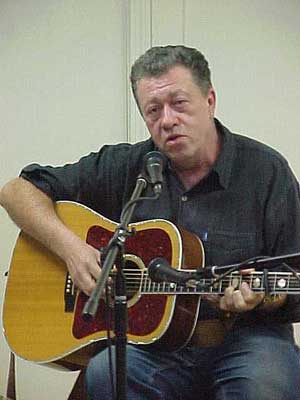 Rick Fielding is a veteran Canadian musician who established himself as a fixture on the Toronto folk scene in the early 1970’s. Since then, he has played with hundreds of famous and not-so-famous musicians, toured extensively throughout Canada, and for the past ten years has hosted “Acoustic Workshop” on CIUT Radio in Toronto.

With a repertoire spanning country, blues, bluegrass, traditional ballads, contemporary folk, and more, Rick is an accomplished musician on guitar, banjo, dobro, mandolin, and autoharp. His music has taken him from intimate folk clubs to major festivals across Canada and the United States, where he has delighted audiences with his eclectic repertoire, tasteful accompaniment, and expressive singing style.

His previous album “Lifeline,” recorded for the prestigious Folk Legacy label in Connecticut, was widely praised in the press for its excellent songwriting and fine musicianship. On his new album This One’s The Dreamer, Rick again illustrates his prodigious musical abilities and his knack for writing and choosing top-notch material.

​From the opening bars of “This One’s The Dreamer” to the unusual version of “Salty Dog” to the laid-back swing of “Gin Mill Syncopators” to the traditional ballad “The Wind and the Rain” to the Beatles’ classic “In My Life” to the final notes of “When We Gather Once More,’ This One’s The Dreamer treats you to a beautiful selection of timeless music from North American folk traditions.