Wristbands Available at the Door (While Supplies Last) 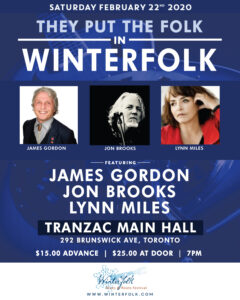 They Put the Folk in Winterfolk, with James Gordon, Jon Brooks and Lynn Miles 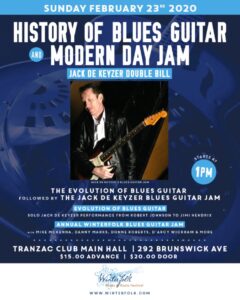 TORONTO — Date — February is here, the countdown for Winterfolk XVIII is officially on, and tickets for the annual festival’s three separately billeted shows are available now!

All held at the Tranzac Club, these exclusively ticketed events will feature a bevy of multi-award winners like Ken Whiteley, The Layrite Boys, Chris Whiteley, Diana Braithwaite, James Gordon, Jon Brooks, Lynn Miles, and a double daytime bill from Jack de Keyzer. Wristbands for these shows are not necessary; separately purchased tickets are required for entry and tend to sell-out pre-show.

It’s all in a weekend for what’s long become one of Toronto’s most anticipated music festivals.

Set to celebrate its 18th year this February 21st – 23rd, the annual Winterfolk Blues and Roots Festival sends a clear signal that folk, roots and blues are among the city’s most beloved and sought-after genres.

After all, what else but one of Canadian music’s most continuously growing genre sets could inspire fans of all ages to flock to the heart of the city in the midst of a true-blue Canadian winter? 18 years and running?

The Winterfolk Blues and Roots Festival was founded by Festival Director Brian Gladstone, and is a division of The Association of Artists for a Better World, a registered non-profit organization.

“This year’s combined celebration has affirmed what we in Toronto have long-recognized: this city has an unwavering commitment to musical excellence.”

Advanced wristband sales for Winterfolk XVIII are now closed, but will be available for purchase at the door on festival weekend. Wristbands allows entry to more than 90 performances and the ability to avoid lineups at the door; there are three additional and separate ticketed events.

Winterfolk gratefully acknowledges the generous support of the Department of Canadian Heritage, its media partner Toronto Blues Society, and it’s envoy of dedicated volunteers; those available for volunteer opportunities can visit here.

Of note, The Tranzac Club is an accessible location, and The Annex Hotel is offering festival goers 15% savings on their room reservation with the code WINTERFOLKANNEX — details are available on our website here.