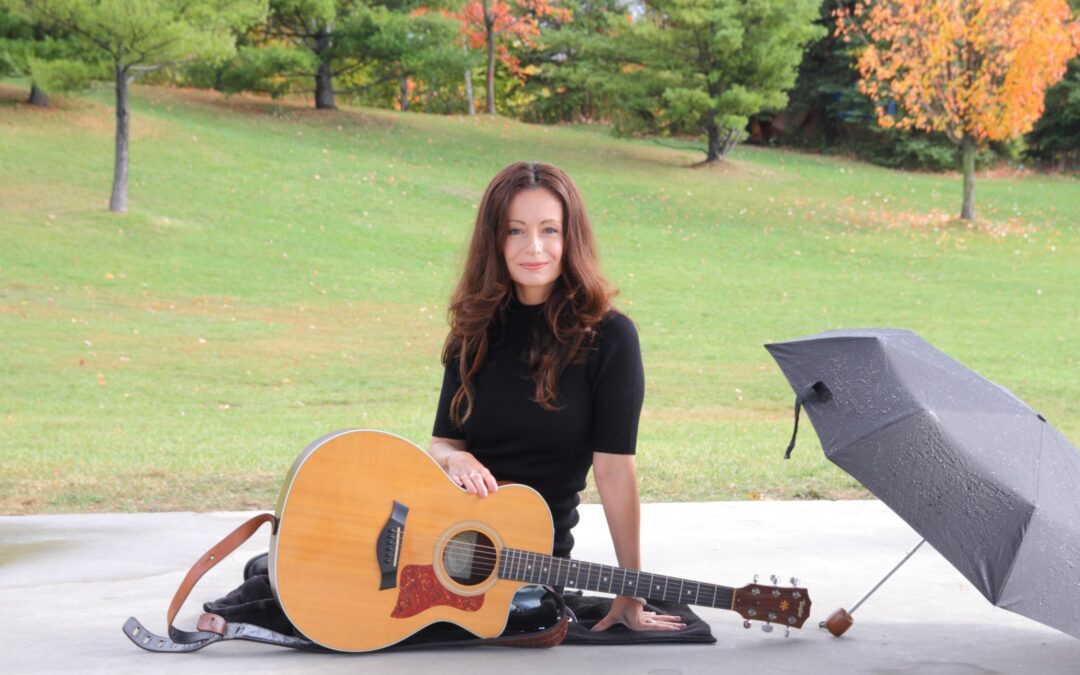 Blessed with a voice reminiscent of an early Joni Mitchell, and an ability to imbue her vocals with palpable and authentic emotion, Saskatoon-born, Toronto based singer, songwriter and actress Melanie Peterson has become one of the brightest lights on the Toronto music scene.

While receiving frequent plays on CBC Radio’s Fresh Air, the songs on Peterson’s latest album ‘We Got This’ are critically lauded as “stunning” and “spine-tinglingly good!” and what continue to make her a favourite across Canada for her live performances.

Peterson was born and raised in Saskatoon, Saskatchewan. Her parents both played guitar and sang together in a jug band while attending medical school at the University of Saskatchewan, and Melanie sites growing up listening to them sing and play folk songs as a key formative experience.

Melanie has been referred to as “Mary Poppins with a broken heart” by BBC Radio and has been recognized as having “a beautiful voice” and being a “terrific songwriter” by Joe Warmington of the Toronto Sun.  She earned a spot within the independent music scene in Toronto March 2012, when she showcased her songs during Canadian Music Week, at the Royal York Library Bar.  She was invited back to perform two showcases at CMW 2013 where she played songs from her debut album.

Melanie initially moved to Toronto in the late nineties to pursue a career in acting. Between acting jobs, she often picked up the Gibson guitar her father had given her as a parting gift.  She soon began the second leg of her artistic journey: songwriting and performing her songs live. The feedback she got each time she ventured out to play her songs for Toronto audiences was encouraging. She was invited to host and perform her original songs in a monthly female singer-songwriter night at the renowned Cameron House. The show was called Girls Girls Girls and the second Saturday of every month between September 2010 and December 2012.  Melanie, along-side many of Toronto’s top female singer-songwriters, packed that room.  Melanie’s songwriting skills improved rapidly during this period as audiences were hungry for new songs and Melanie was only too happy to oblige.

Melanie released a five-song EP in 2011 titled ‘After The Fall’ and the reviews were encouraging.

“If you are looking for super live music, check out Melanie Peterson, a terrific singer and songwriter…she sounds just as good live as she does on her album…. She has a beautiful voice and her songwriting is tops, too.” ~ Joe Warmington Toronto Sun.

“Melanie Peterson is destined for great things. With aching vibrato that reminds one of early Joni Mitchell she weaves the stories of her life into her music with effortless ease.” ~ Beaches Living.

She launched her first full-length album ‘Unbreakable’ in April 2013 at The Piston in Toronto. Melanie followed that up with a triumphant NXNE showcase and a successful Southern Ontario tour. The album was well received by critics and fans alike. Many of the songs from ‘Unbreakable’ received spins on BBC, CBC, various indie and community/college radio stations and Internet radio.

“We have very much enjoyed playing a variety of tracks from ‘Unbreakable,’ Melanie’s first full length CD release and my Saturday morning listeners have been quick to let us know they enjoy what Melanie does!” ~ Monica Winfield, host BBC Radio Leicester.

Melanie’s song “Lucky Me” was chosen, out of hundreds of submissions, to be included in Toronto’s Music 311 winter 2015-2016 playlist.

Melanie followed her release of ‘Unbreakable’ with a six-song cover EP titled ‘Read It On The Radio,’ which was part of a six-week digital download campaign in which Melanie released one new cover song every week from April 28, 2014 to June 1, 2014.

“After recently releasing her second full length album, ‘Anywhere from Here’, Melanie and her band came to The Piston wanting to give their dedicated audience a live experience of all of the songs from their new album. The evening was spectacular and the house was packed!” ~ SNAP Bloor West.

Feedback for ‘Anywhere from Here’ was positive and Melanie toured the album in southern Ontario the summer of 2016 and embarked on a cross Canada tour from Toronto to Vancouver thanks to the Via Rail Artist On Board Program in the fall of 2016.

“The songwriting is genuine and self-aware, and there is a positive tone even in the heartbreak. In fact, the progression of the songs on Anywhere From Here, read like the life of a romantic relationship.” ~ Cate McKim, Life With More Cowbell.

Prolific songwriter Melanie released original Christmas singles “Santa’s Sleigh” in 2016 and “When You Were Here” in 2017.

In early 2017, renowned SKA artist Susan Cadogan recorded Melanie’s “Truth Talking,” and released it as a single. “The legendary Susan Cadogan sings a rootsy rocksteady love song, with a sweet lyric by Melanie Peterson that could have been written a thousand years ago or last week.” ~ SKA’D For LIFE.

In summer 2017 Melanie launched a two-song EP titled ‘Two.’ The songs on the EP accrued vital airplay and continue to be added to Spotify playlists. Melanie was recognized as having “strong songwriting chops” by Kerry Doole of FYI Music News, and the track “Been So Long” was a runner up for the Colleen Peterson Award. In the fall of 2017 Melanie toured the EP through southern Ontario, Quebec and then to the East Coast thanks, once again, to the Via Rail Artist On Board Program.

In 2019 Melanie released a holiday single – produced by legendary, multiple Juno Award and Polaris Prize-winning Canadian producer and musician Michael Wojewoda – “Christmas Breaks My Heart,” available on all digital platforms November 29, 2019 and was celebrated with a single release party at The Free Times Cafe in Toronto. This song was a finalist in the Great American Songwriting Competition.

On November 27, 2020 Melanie released her latest album (teaming up again with producer Mitch Girio), her six-song EP ‘We Got This,’ to wonderful reviews. Two singles from the EP, “We Got This” and “Tightrope,” were also released in 2020, in advance of the album/EP release date.

“This is a great song [We Got This]. Spine-tinglingly good! I’ll definitely be giving it a spin.” ~ Jan Hall, Folk Roots Radio, May 2020.

“Toronto-based singer/songwriter and actress Melanie Peterson is remaining active in pandemic days. She is promoting a new single, the aptly-entitled We Got This, the title cut from an upcoming EP.” ~ Kerry Doole, feature FYI Music News, May 25, 2020.
“Toronto’s triple threat Melanie Peterson has released the first single “We Got This”, off her upcoming album of the same name. …It’s warm aura and uplifting message is a much-needed energy during these times.” ~ Rebecca Mattina, Canadian Beats, May 22, 2020.

“The Toronto singer-songwriter adds some new dimensions to her sound, as her acoustic music gives way to more and more pop production and adornments.” ~ Bob Mersereau, The Top 100 Canadian Music Blog, Nov. 26, 2020.

“Along with the title track, “Tailspin” is another stunning highlight tucked away in this collection of songs, and definitely my personal favorite here.” ~ Martin Noakes, Great Dark Wonder, Nov. 27, 2020.

And, to round out 2020, Melanie released a cover of “Jingle Bells” on December 21 (Mitch Girio, producer).