It’s closer than you think: Winterfolk preview tonight at Hugh’s 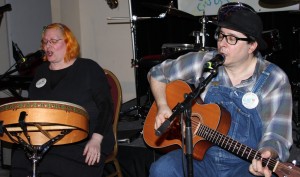 Reprinted from Toronto Moon Magazine – We referred the other day to the spectacular success of the annual Winterfolk Festival started by Brian Gladstone fifteen years ago next month and as always this year’s 16th edition of the now seminal event promises another great weekend of live Roots, Blues and Jazz music when it takes place Feb. 16-18on five stages in venues on Danforth Ave. in East TO.

This evening you can get a taste of some of the highlights of this year’s edition at a preview showcase concert being staged at Hugh’s Room in west TO.  It includes festival director and founder Gladstone along with HOTCHA!; Dirty Dishes, Mr. Rick, Tony Quarrington, Julian Fauth and Brighid Fry.

The $25 admission charge goes to help paying the more than 100 artists the festival employs each year and while you’re there you can still scoop one of the last of the $15 early-bird full-weekend wrist bands (they sell for $25 after Jan. 30), which gives you access to about 150 shows —that works out to less than 15 cents a show!

Tonight’s preview show starts at 7:30 but it’s probably a good idea to arrive at the club at 2261 Dundas St. West at Roncesvalles shortly after doors open at 6 and if you want to guarantee a seat dinner reservations are still available at 416-533-5483.