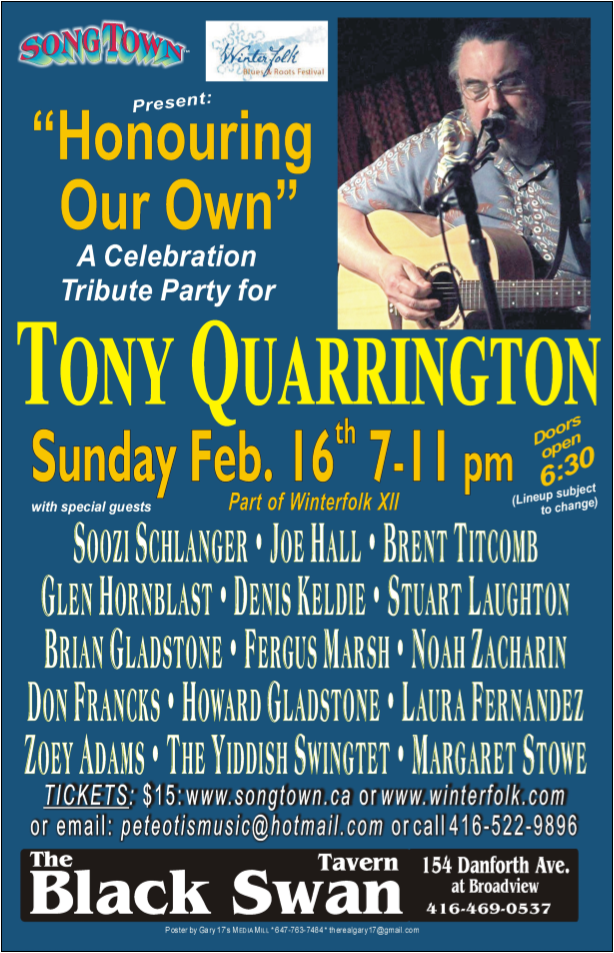 Veteran musician Tony Quarrington has been a formidable and thriving presence on the Toronto music scene for more than 40 years. He first appeared at the Mariposa Folk Festival in 1966, and played at many renowned Yorkville nightclubs and coffee houses in the late ‘60s, performing ballads, blues and his own original tunes.

Quarrington’s relentless career as a sideman and studio musician has seen him appear on literally hundreds of other artists’ recordings, playing guitar, banjo, mandolin, piano and dobro, and lending his voice as a singer. He spent the ‘70s and ‘80s playing countless sessions, and eventually moved into a new role as a producer, helming dozens of widely varying projects. In 1998, he won a JUNO Award for his work on Willie P. Bennett’s masterful roots recording, Heartstrings. He not only produced, but arranged and played on this seminal album, and also wrote its title song.

A folk and roots music powerhouse, Quarrington has had long musical associations with such notable performers as Joe Hall, Daisy DeBolt, Brent Titcomb, Willie P. Bennett, Rick Fielding, Laura Smith and Mose Scarlett. Although he’s most widely known as a brilliant guitar virtuoso, Quarrington has always written songs as well. Most recently, in 2012, he showcased his remarkable skill as a songwriter in two solo recordings of his own material, First Set and Gathering Place: Songs Of Toronto.

Quarrington’s songs are thoughtful, literate, and well-crafted: they display a unique musical style, with unusual twists and turns, both in melody and emotion. Some are funny, some tender and lyrical. He has penned tributes to such musical heroes as Django Reinhardt, Hank Williams, and Lonnie Johnson, and wistful tunes like “The Waltz We Never Quite Danced.” There’s a bluesy tinge to his singing voice that’s both captivating and memorable.

Quarrington has always enjoyed playing jazz, and that’s been the main thrust of his live playing in the ‘90s and 2000s. He’s released 15 jazz recordings as a bandleader or co-leader, and appears on dozens more as a sideman. Two of his first jazz releases were One Bright Morning (1998) and Deep River (2000). One of the most celebrated was 2002’s Group of Seven Suite, an extended jazz work based on the group’s paintings. The recording, released by CBC Jazz Records, features many other artists, including Jane Bunnett on sax and flute, and Jane Siberry on vocals. Quarrington has been pleased to be able to present this work at the Art Gallery of Ontario, the McMichael Canadian Collection, and Hart House, where many of the paintings reside. Other recent jazz recordings involve Order of Canada inductee Don Thompson, Jaymz Bee, the Yiddish Swingtet, violinist San Murata, and his own trio, Swing Street.