February can be a long month, despite what the calendar says.

It’s cold, people are broke from holiday splurges and spring is still just a foggy futuristic dream. Cue the Winterfolk Blues and Roots music festival on the Danforth, running from Fri. Feb. 12-14.

The four venues playing host are within a short walk of each other: Black Swan Tavern, Dora Keogh, Mambo Lounge andTerri O’s. 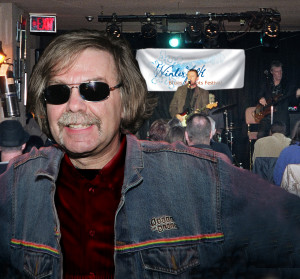 This isn’t your average festival though. Sure, there’s plenty of live music, but there’s a twist that makes Winterfolk special: themed events.

“The artists write and perform but to me the themed events are the substance of the festival,” said Winterfolk founder and director Brian Gladstone. “It just adds so much flavour and spontaneity. The events all come from passion.”

Artists are usually given two or three performance slots. They are encouraged to present an event or workshop for one of their sets.
“We go through the list and say, ‘Okay, three people suggested something related to music and health, so we’ll put those artists together,’” Gladstone said.
“There’s such an energy when you’re on stage with people you have these artistic commonalities with. It always works out really well.”

Isabel Fryszberg is one of the artists participating in a themed event this year. She will be performing along with Lynn Mantle and Howard Gladstone (Brian’s brother) as part of  Healing in Song on Saturday night.

“I call it art-based occupational therapy because the art becomes their occupation. They’re no longer a patient, they become active artists,” she said. “You know how they say, ‘You’re only as good as your weakest link’? Well, that’s our society. We are only as good as our weakest link and our weakest link is mental health.”
At the Healing in Song event, Fryszberg will perform songs written by The Social Mystics, a group made up exclusively of Creative Works Studio artists.
“I truly believe in the power, not only of music, but of community,” she said. “Music and community put together is a powerful drug.”

Fryszberg hopes that by showcasing the words and feelings of studio members, it will help break down the stigmas and boundaries attached to mental health.
She has Gladstone’s support.

“I understand the power of music. In my lifetime I’ve seen music end a war and tear down a wall. It’s definitely pop culture that does that,” he said.

The root of Winterfolk has always been about helping people. Gladstone started it in 2002 after receiving another in a long line of rejection letters from established festivals. He wasn’t alone. “Everyone in music says the same thing: ‘It’s impossible to get into festivals,’” he said. “I figured if I want to play a festival, I’ll have to make one and hire myself.”

After a successful first two years, Gladstone founded Artists for a Better World to help grow the Winterfolk movement. “When we apply for grant money, we have to be an incorporated not-for-profit organization,” he said. “So I came up with ‘A Better World’ so we could be the parent organization for Winterfolk and also do benefit concerts and fundraising for various other charities, which we do.”

The festival that started on a rebellious whim now has 150 performers scheduled for its 14th year.

It should be noted that artist applications for Winterfolk are free and the majority of those selected to perform get paid.

By comparison, other Toronto festivals such as Canadian Music Week (CMW) and North By Northeast charge hefty application fees. They also don’t pay most of the selected performers, even though their fans pay to see them play.

CMW wristband options range from $50 to $200 for this year’s festival. A Winterfolk wristband costs $15 and provides access to most performances and themed events during the three-day festival.

“I grew up during the war in Vietnam and the whole folk revolution,” Gladstone said. “Doing something, giving back, it’s just all part of the culture I grew up in. Today they do Facebook groups.”
With unique themed events, a short walk between venues and an affordable price, maybe February isn’t all that bad, thanks to Winterfolk.